Artificial insemination is a simple treatment which consists of the deposition of the sperm in an assisted way into the woman’s uterus. In this procedure the ovulation is programmed to make the egg coincide temporarily with a capacitated prepared sperm to fertilize it. In the woman there should not exist any barrier impeding the communication of the ovary with the uterine cavity, being it necessary that at least one of the tubes is permeable.

In the Rincón Fertility Institute donors with an excellent semen quality which guarantees the possibility of pregnancy are selected. In all donors all possible pathologists are ruled out through analysis and blood tests. The donated sperm are cryopreserved and only samples which have overcome the defrosting test and allowed us to obtain a good quantity to proceed to insemination will be used. The selection of the donor is made in accordance to the physical characteristics and blood groups of the couple.

What does the procedure consist of?

Artificial insemination is carried out in three simple steps:

2.    Spermatic capacitating: the donor semen will be defrosted in order to recuperate the spermatozoids with greater mobility, which at the same time will be those with bigger fertilising capacity.

3.    Doctor’s appointment insemination: the capacitated sperm will be carried in a special tube which will be used as means of transport to the interior of the uterus. This procedure is painless and will be carried out in the doctor’s surgery.

When is Insemination required?

· The artificial insemination with donor sperm is required in those couples in which the male presents a severe alteration in the testicle which impedes him to produce spermatozoids (Azoospermia) and when no other treatment is possible.

· Also in those cases in which the male suffers a hereditary illness in which it is not possible to make a genetic advice and after PGD of which presents risk of transmitting the condition.

· Those males who present an illness of vertical transmission that cannot be detected by special semen treatment.

· Those single women or same sex couples who desire to have family will be able to opt for artificial insemination with donor sperm in the Rincón Fertility Institute. 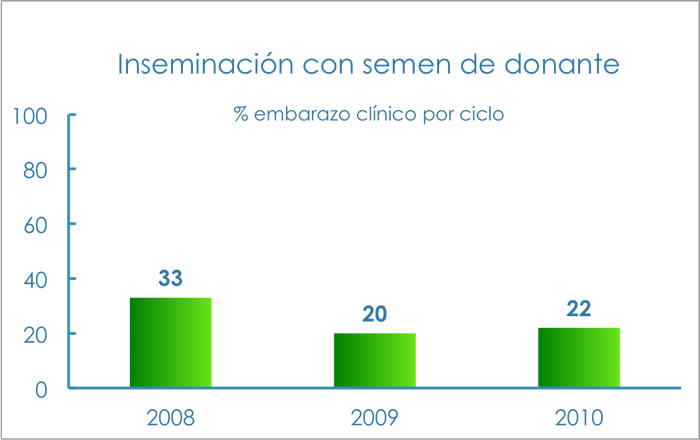