What is egg donation 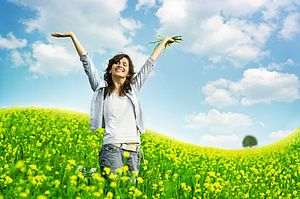 The majority of couples can conceive naturally. Nevertheless; some other couples are not so lucky, even though they deeply desire to experience pregnancy and to give birth to their baby.

Thanks to the egg donation program at the RFI couples have the hope to become families. Egg donation makes it possible to build up a future with an offspring in the transmission of love, values and family history, a link that goes beyond biological borders


What does egg donation consist of?

Egg donation is an anonymous and generous gesture in which a woman provides eggs (donor) to be received by another woman who cannot naturally conceive (recipient).

The egg or oocyte is the female reproductive cell that is found in the ovaries. A woman is born with a reserve of approximately two million oocytes in her ovaries and number gradually decreases with each menstrual cycle. From the age of puberty a dozen eggs develop each month and only one of them will reach maturity with ovulation which takes place two weeks after menstruation. A woman throughout her life will ovulate, on average, four hundred times which means estimated quantity of 400-500 eggs. The rest of the eggs will not be developed and will naturally disappear. The process of donation consists of a controlled hormonal treatment which will allow the maturation of dozens of eggs which are being developed along a new menstrual cycle; they are extracted and will be used in In Vitro Fertilization treatment (IVF). More information about the donation treatment.

The donation is divided into two big stages: preparation and stimulation. This process can last up to 40 days and requires at least seven visits to our clinic. Steps to follow

In which cases does a couple need the eggs?

The oocytes are donated to couples who cannot naturally conceive; either because the woman, although being young, her eggs are abnormal or, because due to treatment of a serious disease she cannot use her eggs. They can also be donated to couples who have the risk of transmitting a serious genetic disease to their children. In any case the medical supervision is essential throughout the whole process and the receiving couple should be in the age medically considered possible to carry out the pregnancy.


After collecting the oocytes, they will be inseminated through the procedure of in vitro fertilization (IVF).

More information about the donation treatment.

“It is very gratifying to be able to help other women become mothers. Every woman has the right to devote herself to that unconditional love"

“Thank you very much; you play at making many a person’s dream come true”